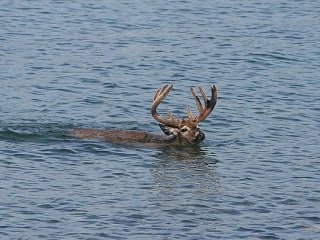 Now is the time to start scouting for Whitetail deer, and if you want to break out of your normal scouting routines and find something that is guaranteed to naturally attract deer, look for water. In deer country, there isn’t a creek, pond, brook, river or lake that does not have an edge containing deer tracks. Contrary to popular belief, hunting water sources is not only exclusive to early deer seasons where the temperatures are warm.  Deer love water all year long for different reasons, and locating water sources in your hunting area can pay off when hunting season arrives.

Everyone knows when it’s hot that deer need to drink every day.  While hunting and guiding Whitetails for almost 30 years, I have figured out that deer love water for various reasons and I have learned to pay attention to the locations of various water sources.

One fall while hunting in a tree stand, I noticed multiple deer drinking from a tiny spring that was barely bubbling up from the ground, and then walking over to a small pond to investigate and sniff around.  These deer were not drinking from the pond; they were using it much like an office water cooler.

Through smells and licks, they seem to be gathering information regarding other deer. Occasionally they would wade into the pond and just stand there. I noticed them doing this for years, and they only occasionally seem to drink from the pond, but I suspected that they were really just touching their noses to the water and smelling it.  I am not a biologist so I can’t say why they were doing that, but I do know that certain blood hounds can smell skin cells in water and deer might be capable of harvesting olfactory information as well.

Another strange occurrence regarding water and deer is when I noticed that some deer would consistently walk out of their way to wade through water. Did they simply enjoy wading and how it felt, or were they cleverly using water to help mask their scent?  I don’t know the answer to that, but I do know that it was another excuse for them to use water for some purpose other than drinking.

One year, I watched a mature buck cross a creek at the exact same location for about eight days in a row. Most of the time he would pause and the leap over the water, but twice I watched him walk up to the water, smell it and then wade through it.  I have also witnessed that some of the heaviest deer trails in my hunting areas ran between two separate bodies of water.

Whatever the mysterious relationship between deer and water is, it is a fact that they are attracted to it, and finding these liquid deer magnets might just help your scouting success.