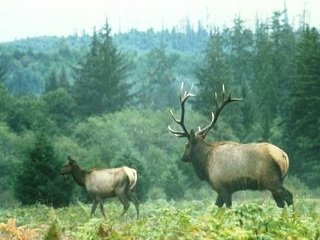 Although the coasts of the Pacific Northwest are considered moderate climates, some of the hottest temperatures of any open elk season can occur just a few miles inland where typical hunting days during bow season can easily reach 100 degrees.  That might seem like a crazy time to hunt elk, but the hunting can good if you know where to hunt.

Oregon is one of the most hunter-friendly states when it comes to general season, over-the-counter-tag elk hunting.  A non-resident can show up, buy a tag and go hunting for about four weeks.  Elk can be found in the arid sage brush and high desert country of eastern Oregon, or you can chose to hunt them in the brushy western zone loosely called ‘the coast,’ which is slang for anything west of the Cascade Mountains.

Unlike the eastern Rocky Mountain elk, the coast’s elk are Roosevelt elk. These animals tend to have smaller antlers than their eastern cousins, but their bodies are generally larger.  They also like the brush and like to hide, so finding them is not easy. It is almost a sure bet that if you can find a northern shaded hillside, with heavy cover, a good water source and a flat bench, you will be in some elk’s living area.  Getting away from the heat is easy when you have a complete blanket of trees blocking the sun light and a good flowing water source churning out cool moisture into the air.

During the last half of September, their hormones force them into traveling and talking more than at any other time of the year.  Where not highly pressured, Roosevelt bulls are very vocal. Using a bugling call can be a great way to locate them even during the early part of the bow season. They just can’t help themselves in responding to other bull calls.

Right before the rut, dominate bulls start to keep tabs on the area’s cow herd and even begin collecting harems. It is at this time in the season that you can call in mature bull elk with a bugle call. Dominant herd bulls will come if they feel threatened by competition, and younger satellite bulls will come to a bugle with the hopes of stealing a cow away from the bugling bull.

Many hunters, who cannot quite convince a bull to close the distance while calling, choose to blow a variety of cow and calf calls to simulate a herd that just might want a bull to gather them up.  I don’t think there is any more active hunting season than a hot temperature elk hunt on the Oregon Coast.