Is Hunting the Ultimate Predator for You? 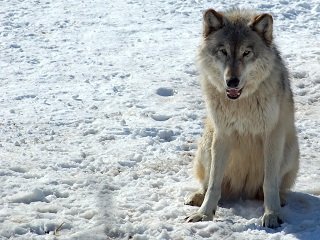 The hunting of wolves has long been a controversial topic in this country, as humans have a long and impassioned history with the wolf.  On one hand, we admire the creature’s beauty and wild spirit to the point that long ago it was domesticated and made into our ‘best friend,’ on the other we fight against its nature to kill our domestic and game animals and struggle in the competition for the top rung of the food chain.

Having remained at the top for centuries, the wolves of North America were nearly wiped out by a systematic predator control program in the youth of this country.  With a bounty on their heads, the wild wolf numbers fell drastically. Fairly recently, wolves were brought back successfully, until they were removed from the Endangered Species Act in 2008.   Finally, an opportunity had arrived again for the hunter to measure himself against the ultimate North American predator.

Of course, some will continue to insist that wolf hunting should not be allowed at all, because ‘wolves have got a bad rap’ and don’t deserve to be killed for it. These are the people who don’t understand that the nature of a hunter is one of conservation.  Hunters wish to conserve the wolves and the game that feed us both so that the resource will be available in the future.  The anti-hunters are also the people who do not understand that an intelligent and perfect predator will not only “hunt for food” but hunt when times are easy to keep its skills practiced and boredom at bay.  When times are tough, a predator will also hunt where the prey is guaranteed and easy; such as a ranch with domesticated animals available and confined.  This is where the wolves originally wore out their welcome and where they continue to do so.

Ranchers and wildlife control are responsible for the most wolf kills.  Currently, Idaho, Alaska and Montana are the only states that allow wolf hunting.  These states have limited areas, dates and bag limits, so it’s important to check the details before you plan your trip.  Idaho allows a two wolf bag limit in some areas for hunting with any weapon, and three for trapping.  Alaska has limited areas for hunting and trapping wolves as well, they also have predation hunt areas where wolf populations are controlled heavily. Montana has yet to post this year’s regulations until after their July board meeting.  If you can’t wait, and wish to get an idea what hunting is like there, you can check last year’s hunting regulations on their fish and game website. This year, Wyoming is also debating on opening a limited wolf hunt in their state.  They will also be posting possible regulations this fall.

If you are interested in hunting a wolf, you can find more information from the state websites listed below.