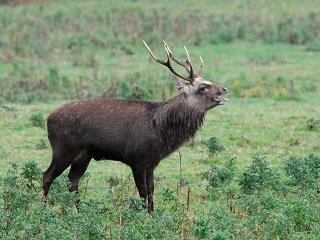 There is a hidden gem of an animal living on the coast of Maryland that doesn’t get a lot of press, but they deserve plenty of attention for being so unique. The Sika deer is one of the most handsome of big game animals living in North America, and it deserves a look from hunters wanting to try something new.

Sika deer are related to the North American elk. Not only do they look like elk, they also have bugling teeth and they do bugle much like an elk does during rut.  The most striking difference between the two is primarily their body size, as Sikas are about the size of an eastern Whitetail deer, and they taste as good as a Whitetail too.  Much like elk, the bulls are a darker color than the cows and a dominate bull gathers harems during the breeding season.

Originally from Japan, they found their way into Maryland because a resident there obtained some Sika deer from a circus that had fallen on hard times in 1916, and the rest is history. They can be found mainly on the Maryland’s eastern shore, and they really thrive in swampy, mosquito-infested areas.

Although Maryland is not the largest state, there is plenty of public land where anyone can hunt Sika deer.  The Taylor’s Island and the Fishing Bay wildlife management areas offer over 25,000 acres of public hunting.  If you are leery of do-it-yourself hunts, there are numerous hunting guides in Maryland that offer Sika hunts, and they can easily be found on the internet.

It is legal to bait in Maryland and hunting over feeders is an effective tactic that not only allows a hunter to view more animals, but it also allows for a nice, open shot so a hunter can make a fast and ethical kill and contribute to wildlife management.  Corn is the best bait food and whole corn is a perfect food for wet environments as it takes days to spoil unlike cracked corn or beans.

Maryland offers generous hunting seasons for Sika with bow, muzzle loader and rifle. The earliest of the seasons starts in September and most end in early January.

Hunters have a chance to harvest an animal that mostly flies under the hunting radar, in a state that offers long seasons and plenty of public land to hunt, and you can use bait.  Put a Sika on your hit list now.