To Meat or Not to Eat 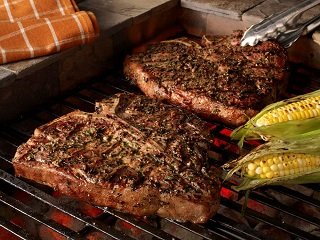 In a recent survey I took part in on a hunting website, hunters were asked if they considered themselves ‘meat hunters,’ ‘trophy hunters,’ or ‘no preference.’ Surprisingly to me, 68% claimed they were meat hunters, and only 15% claimed trophy hunter status. One commenter put it all in perspective by stating that, “inside of every meat hunter, is a disappointed trophy hunter.” That statement is more accurate than most of us will probably admit.

I like to think that I sometimes don’t fall under any of those categories. Sure, I never waste what I shoot, and I sure do like trophy racks, but I sometimes hunt just to hunt. There is really nothing philosophical about it, but rather, I just like the challenge of being a part of nature. However, I do have to eat and wild game meat is the best meat available and it is a total bonus at the end of a successful hunt.

I once heard the rocker and pro-hunting activist Ted Nugent answer a critic that told him he did not have to hunt because he could buy meat at the store. He proclaimed, “No I can’t. They don’t sell elk or venison at Safeway.” Touché. They sure don’t, and we as hunters need to remember that fact and we need to put that in our in-defense-of-hunting arsenal. Nugent’s point not only draws attention to ignorant thinking, but it also highlights the unique and special reward we hunters get in the form of meat. Meat is good and my family likes it, and I don’t have to apologize to anyone for that and neither do you.

Meat is also never perfect and trophy hunters know what I mean. Sometimes a rutting buck or a rutting bull does not have the best tasting meat on his bones, but it can still be used and made to be very palatable. One of my favorite foods is bear salami or bear summer sausage. When Black Bear is ground up and mixed with other ingredients and smoked, it is delicious.

I enjoy sharing my game meat. I love giving friends or family premium cuts of prime meat.  There is no better advertising for hunting than sharing high quality meat snacks with non-hunters, and there is no better satisfaction then working hard for something and sharing it.

Having an abundance of meat in the freezer is also great for any unexpected emergencies that could come up. Food storage is a basic tool for preparedness, and you owe to yourself and your family, and even some neighbors, to be prepared for a disaster.