Good Hunting Partners are Hard to Come By 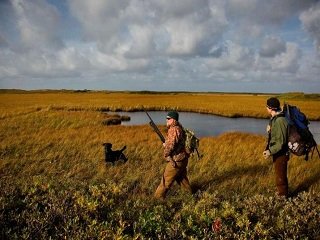 Getting older, I have discovered the joys of hunting alone. As long as I can stay safe, I like hunting alone and I hope to do more of it, but I still like to reflect on my early days of hunting that were often shared with various characters called ‘hunting buddies.’ All hunters will eventually have hunting companions, but I wonder if they will be as colorful as mine were.

My best hunting buddy was the man who taught me how to hunt, my uncle. When I was in my teens, Uncle Bud was a hunting god to me. He could do no wrong and he knew everything. I admired and respected him, and I wanted to be just like him when I grew up.  He was a welder and a mechanic and when everyone in his small Illinois town needed something fixed, they came to him. He was a master at engineering fixes in equipment, vehicles, and structures and just about anything. He was a WWII veteran too, and although he is gone from this earth now, he will always be my best hunting buddy.

For some reason, I attract friends that are bossy and headstrong. In my early 20’s, I had a hunting friend who like to control his surroundings and sometimes those surroundings included me. I am a veteran and I have had enough of people controlling me, so when he pushed me to my limits one fall day many years ago, I decided to turn all his scope dials when he was not paying attention.

I thought it would be funny to watch him fail at shooting a deer due to his scope being so far out of zero. The joke was on me though as he spooked up a small buck that immediately went on a full out run. Shooting a running deer is almost impossible in the best conditions, but when my buddy raised his rifle and fired, the buck dropped dead in its tracks. Maybe we were more alike than I’m comfortable admitting because, he had the same idea and had turned my dials (without knowing what I had done) when I wasn’t looking.  When I went to shoot my buck, the shot went haywire and I missed out on a deer that year. Like I said, the joke was on me.

I had a one-in-a-million Labrador retriever during the ‘90’s that was so perfect at bird work; I lay off big game hunting for a few years just to enjoy bird hunting. She’s gone now, but she still makes me smile.

Finally, I had a hunting buddy who I like to refer to as Rambo. He was also a veteran, but he was under the impression that everything he had ever experienced in his life and career was way more important than the others around him. He drove me crazy outside of hunting, but when we were chasing big game and cut off from the real world, he was a pleasure to be around. Go figure. You never know what kind of person you will end up hunting with, but if you are lucky, you will remember them.