Perils of Poor Planning, Part One 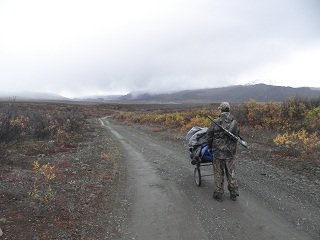 Most tales of danger include unpredictable animals or unhinged humans of some sort; however, this article is a recount of how a lack of planning nearly cost me my life  on a recent hunt in Alaska.  Since I am only a week removed from the situation, I do not feel like facing it or writing about it, but I am doing so in the hopes that at least one person may learn from my mistakes, and I made a lot of them.

Innocently enough, I had planned a combo caribou, moose and grizzly bear hunt in one of the many parts of Alaska that is walk in only. This means that you cannot have any motorized equipment or machine to aid you in your hunting pursuits.  It also means that you have less competition from other hunters because most hunters don’t like to backpack for miles while hunting.

I had been itching to hunt all winter and spring, but I was waiting for a time when my hunting buddy could clear his schedule.  My hunting friend had way more experience hunting in Alaska than I did. My first mistake was not planning the hunt to fit me and instead leaving all the planning up to him since he had the experience. I am not a ‘type A’ personality, so I don’t mind following someone else who has a plan of action. As an Airborne Paratrooper in the Army, I learned that a rounded person is both a follower and a leader, so I chose to follow this time.

He declared that we were going to an already familiar area of his to hunt, and since he had been there several times over the last 10 years, I felt even more comfortable letting him lead the way. In fact, his confidence helped me to abandon some of my common sense.  The plan was to hike in four to five miles, inflate some rafts and cross a river, which would provide a formidable barrier between us and the other hunters in the area. It sounded like a plan, and we were both eager to escape our lives and get going. The second biggest mistake came when we neglected to check detailed weather reports before we left.

We arrived during a rainy week, and although the river looked higher than normal, we crossed it anyway so we could get hunting the next day. We should have sat tight and watched the weather before making this cross-river hunting commitment, but we didn’t. That turned out to be another mistake and it would eventually leave us stranded with a major storm front approaching, and a still rising river.

At the end of the ordeal, we barely made it out of the area. Less than 40 miles away from us, a hunter died while trying to cross a swollen fork of a river. Roads and bridges were washed out of several roads, and more hunters died in the area. In part two of this story, you will read how my mistakes added up to a life-or-death situation and how two pieces of gear kept me safe and alive.