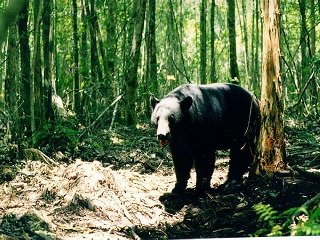 Baiting for bears is one of the most effective and ethical tools that wildlife managers can use for actually managing black bear populations. Being able to observe and selectively choose a bear to harvest is a big deal. Before, I discussed some special considerations and tips for baiting bears, but here are some on choosing the right bear.

It is a fact, according to the Alaska Department of Fish and Game, that there are many benefits to harvesting male bears when it comes to managing a population. First off, the most obvious positive aspect of harvesting male bears is that the bear population is not as drastically affected as much as it would be by taking females. Bears are not monogamous and females can and do breed with multiple males. Taking out a female cancels the possibility of future bear cubs by that female. If a boar is targeted, another male can take his place in the breeding chain.

Another reason to pass up a female bear is that they are limited as to the number of total cubs they can have in their lifetime. There is no disputing that when females are overharvested, the bear population is drastically affected and numbers are reduced.

There are several other benefits to harvesting male bears. For hunters, male bears are often larger than female bears and that means more meat. It also means a larger hide which makes a trip to the taxidermist more likely.

It is a scientific fact that male bears also have a negative impact on black bear populations. A dispositioned black bear can kill more cubs in the population than he can breed back into it. I always consider this fact when I see what I think is a grouchy bear looking for trouble. This may not be a huge factor in your decision making process, but it is something to remember.

Determining size is also an underrated skill. The first think I look at on a bear is its ears. Big floppy ears mean younger, smaller bear. An older bear’s ears look smallish and do not stick out as far as a young bear’s ears.

Another good way to determine if a bear is an adult is to make sure the shoulders are at 30” or more in height. If you have a barrel lying on its side, a good mature bear’s shoulders will be around a foot taller than the barrel. A bear of this size should easily be over 250 pounds. That might not sound like a trophy to most people reading this, but during my 30 years of bear hunting, most hunters think this is a great size when they are actually hunting.

Finally, if you are stalking a bear or have a chance to measure a lone bear’s front pad width in the dirt or mud, look for one that is at least 4 inches wide. A 4-5” wide front pad means the bear should be a hefty medium-sized bear and a pad width of 5-6” is guaranteed to be a nice size bear, even if it’s skinny.