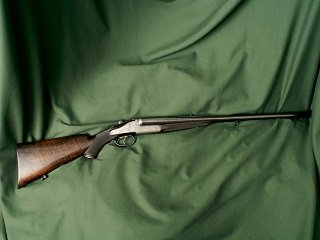 Like most hunters, I often think about going to Africa and hunting my dream animals. Since it isn’t likely I’ll get the chance, I settle for the next best thing and watch African hunts on the television and live vicariously. As I’ve watched, I’ve wondered why African hunters like to use the big double barreled rifles I see. I had some ideas, so to make sure I was close I did a little research.

Since they lack a repeating action, double barreled rifles are about 4 inches shorter than a standard length bolt action or semi-auto loading rifle with a barrel of the same length. This makes them easier to pack through brushy or tight areas. The shorter length and lack of action also makes them lighter than a bolt action or semi-auto action gun of equal size. If you have packed a heavy rifle around for any amount of time, you know this can make a good hunt even better.

“There is no magazine or action that must be cycled to chamber another cartridge, so a double can use cartridges of any length, and many of the most famous double rifle cartridges (the 9.3×74 and .470 NE, for example) are too long for use in repeating rifles” (Chuck Hawkes). Some of the game in Africa can be quite large and bagging an elephant, rhinoceros, lion or a Cape buffalo is a lot less intimidating with a larger cartridge. Also, a rifle without an action is a lot faster, and if something is charging at you, knowing you just have to pull the trigger without drawing a bolt, is a relief and possibly a life-saver.

Double barreled rifles became popular in the 1800s as a hunting rifle intended for use on dangerous game in India and Africa particularly to take elephant, tiger, rhino, Cape buffalo, lion and leopard. This type of rifle was preferred because a shooter could a nearly instant second shot on large, dangerous game without having to "work" the action.

Since the most popular form of this rifle for hunting big game in Africa is the break open type, reloading is really quick even though the rifle only holds two rounds. Since most African hunting is done with a guide/outfitter, there is usually back-up to your two almost instant rounds.

To sum up, the two barreled rifle is a favorite for African big game hunters because it is shorter than an equivalent rifle with an action so it’s convenient for brushy hunts, it’s lighter because of the shorter barrels and the lack of action, it is quicker at pulling a second shot for intense moments, it is quick to reload, and it can hold longer, higher loaded rounds for the biggest, most dangerous game. If you hunt in Africa, it is definitely a time proven weapon.