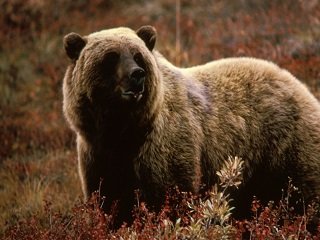 There isn’t any genetic difference between a grizzly and a brown bear. They are the same.  So what makes the difference between the two? It’s simple. It’s where they live. The grizzly is considered an inland bear and the brown bear is considered a coastal bear. Since the coastal brown bear has a diet in rich salmon protein and fat it grows larger. Sounds simple right? Well, if you are trying to get a record book grizzly bear, it isn’t as simple as it sounds.

Since British Columbia’s coastal bears are considered ‘grizzlies,’ but are in reality brown bears, it’s a little easier to get a record book grizzly as Steve of Steve’s Outdoor Adventures proved with his record muzzleloader grizzly.

This error in the bear classification is due solely to the record book people who decided that bears on one side of an imaginary line were brown and on the other side they were grizzlies. Somehow they missed out on this little slip that bears on the coast grow bigger when they eat well. Someone at Boone & Crockett and Pope & Young didn’t think that one through.

So, if you are after a record book grizzly, you will want to head to coastal B.C. If you want a record book brown bear you can continue to hunt Kodiak Island and the coastal areas of Alaska.