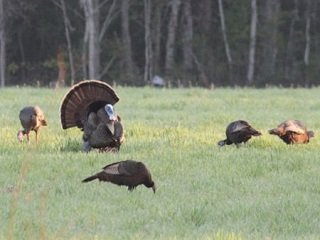 Early season turkey hunting can be some of the toughest hunting of the season but when you bag one on opening day, there is nothing quite like it. Back when I was a turkey guide, I figured out that old gobblers are really hard to kill early, but two year old birds are almost automatic. To me, there is no shame in killing a bird with an eight to nine inch beard, as most two year olds have, so get ready to roll on a two year old dummy bird.

Early season is terrible for big gobblers. For starters, if they have already separated from their winter bachelor groups, they are most likely in the middle of the largest field near their home turf. There is nothing safer than standing in the middle of a field with plenty of other birds to watch your back if danger should happen to attempt an approach, and that’s what old gobblers do before it’s time to mate.

While they are in those wide open spaces, good luck trying to call them to the edge of cover, which is also another word for ‘danger.’ They won’t come because they are secure in the fact that their mating season will happen on their schedule, but you know what birds don’t know that and what birds get anxious and inpatient? Two year olds.

That’s why these guys are easy to kill. During the early days of strutting and gathering in large fields or openings, the two year olds get confused because all the sounds of mating season are prematurely sounding off, so they think there should be some mating going on. When nothing happens before their eyes, they go looking for action and if you are anywhere calling somewhat aggressively, you will suck them right into your kill zone.

Most turkey hunters aren’t satisfied with these young birds so that is a great opportunity to score some hunting karma points on opening day by taking a young or new hunter into the turkey fields.

Besides their eagerness to commit suicide-by-hunter, these young birds offer one other advantage to hunter; there are at least twice as many two year old toms as there are three or four year olds. So if you are into the numbers game, you can hardly go wrong with turkey deuces and don’t forget to share the wealth with rookies.