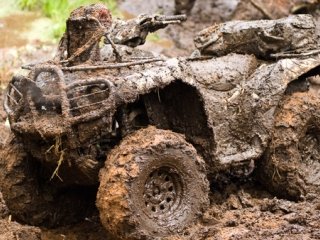 Every summer, County fairs roll out across the country. Corn dogs, livestock sales and ferris wheels are wrapped up with nightly events in crowded dirt arenas, many of which feature local competitors. Besides demolition derbies and rodeo, mud racing has become a popular competition for those who aren’t afraid to get a little dirty.

One of those people is Levi George, a Manteca, California resident that decided to take the plunge this year after deciding that his Jeep was tough enough to take the top prize at the Stanislaus County Fair mud races.

George is the proud owner of a 2000 Jeep Wrangler Sport equipped with a 4.0L, straight six motor. The Jeep build started as a senior project in October of 2007 and quickly turned into an obsession. Over the years George’s Jeep has received an upgrade of Dana 44 axles, 5.13 gears and a set of Detroit lockers in both the front and rear. The rig gets a boost from a 6” Fabtech lift and a set of 35” Super Swamper Boggers; ideal for maneuvering in the mud.

Although it’s not uncommon to see George’s Jeep in tow behind his Dodge Ram pick-up, late July saw the typically clean Jeep strapped to a trailer and caked in a layer of dusty mud in the aftermath of his win at the fair.

The competition was configured much like a bracket race, with two vehicles lined up side by side, making their way through a straight line mud pit as quickly as possible. The winner of each race was then paired with other heat winners until a final victor was weeded out. This year, George’s Jeep rose to the top of the heap, with all those years of building paying off.

Mud races like those held at the Stanislaus County Fair are taking place across the United States. It’s an inexpensive way for four wheel enthusiasts to play in the mud and enjoy a little friendly competition. Entry fees are typically less than the cost of a movie and popcorn; and let’s face it: you don’t get bragging rights for going to the movies. Meanwhile, the only thing that people need to compete is a mud worthy buggy. This opens the door for competitors that range from teenagers with their first pick-up to retirees with an old Jeep and a wild side.

Local motorsports competitions like these also mean that four wheelers are granted a legal, safe outlet for their passion. While many public lands are being closed to four wheeling, and romping through the mud can cause undesirable damage to backwoods roads, organized mud racing makes it cheap, fun and trouble-free for mud freaks to get a fix. However, mud racing is also a quick reminder of just how quickly the fun of muck fades.

When asked if he’ll participate again in the future with his rig that was primarily built for rock crawling, George was quick with a decision. “Probably not! It’s been two weeks since the race and I’m still cleaning the mud off!”