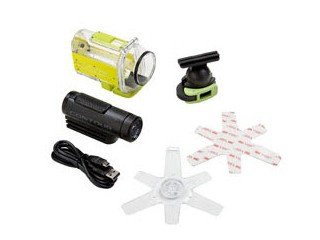 Last month, a good friend of our family hit a deer while riding his dirt bike. Allegedly, said friend was motoring down a trail on a beautiful Spring day and was suddenly face to hind quarter with a deer that forgot to look both ways before he crossed the road. Unfortunately, the only proof we have of this story is the series of bruises and a somewhat mangled set of front plastics, and this is the same guy that claims to have seen BigFoot last summer.  My instincts say he just plain crashed.

He maintains that it was, in fact, a deer and he’s trying to find the buck to collect some reimbursement on the chiropractic care he’s needed. We still enjoy making air quotations with our hands when he brings up the incident. The problem is that we’re the kind of people who like proof. Outdoorsmen (and women) have long been known for embellishing on the truth. According to every fisherman on earth, he’s caught at least one shark and spent a season on the Bering Sea. Riders aren’t much more “honest.”

At long last, modern technology may be providing a remedy to this conundrum of outdoor storytelling, and allow guys who actually did have a traffic accident with a wild mammal to prove their story. Smaller, lightweight video cameras are available at retailers of all sorts, and at price points starting under a hundred bucks. These cameras are easy to use, somewhat durable and affordable enough that if they don’t survive a ride, you won’t have to dip into your retirement account to replace one.

However, holding onto the handlebars of an ATV, dirt bike, or jet ski is already a 2-handed event. The thought of using one hand to hold a camera isn’t feasible. Using a mount, though, is a realistic and readily available solution.

A number of companies are developing “action sports” camera mounts that can be used to secure video cameras onto a vast array of vehicles. One Seattle-based company, Contour, Inc. has released an entire line of motorsports mounts; allowing cameras to be mounted to helmets, or vehicles themselves. Suction cups allow riders to stick cameras to the windshields of UTV’s, or 4×4’s, while strap mounts can be easily secured to handlebars, roll cages or other oddly shaped pieces of equipment. The end result is hands-free  video capabilities with no muss or fuss.

While not everyone will be interested in watching your trail rides, the video may provide a cool point-of-view perspective from gnarly 4×4 trails, or capture that weird instance when a bear, deer or Bigfoot runs across your path.