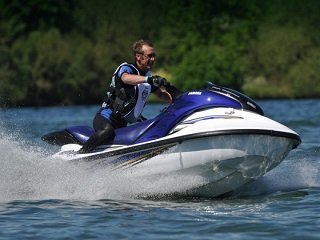 Jet skis are fun. Nobody is arguing that point. However, paying for fuel can be anything but fun. While filling up at the pump before hitting the lake can put a dent in your pocketbook, if you need to buy gas at the lake you may as well hope you have some kind of home equity line of credit available. I’m pretty sure wine is cheaper by the gallon than fuel at the marina.

With that in mind, British based designer Ross Kemp hopes to offer an alternative powered by the sun. With solar power technology, Kemp’s ASAP watercraft isn’t as bulky or fast as traditional personal watercraft, but it does allow recreationalists to cruise around in the water with the assistance of a machine. Opposed to the standard upright seated positioning of traditional jet skis, the ASAP is designed with a flat hull for riders to lay on and grasp hand holds as they’re pulled through the water.

Currently, the machine is capable of top speeds only in the 15 MPH range with the target market as lifeguards and other individuals who need quick access to water – because let’s face it, that’s faster than swimming.

In future models for release to the recreational market, the designer’s goal is to increase speed and offer a less expensive personal watercraft alternative that allows users to save in purchase price and at the pump. However, beyond cost, Kemp also hopes that his design will produce a quieter alternative to big, bulky, loud watercraft that dominate today’s market.

While it’s likely that market mavens like SeaDoo will continue to dominate personal watercraft sales, the idea of something new in the market is an exciting prospect. With innovation, new ideas and support from fans, new equipment provides new ways to have fun – and if you can use the sun for a tan and to power your toys, I say bring it on!