Smoke and Chaos in Oregon: A Hapless Detour to Mudfest

We were about eight miles outside Sweet Home when a lone truck pulling a jeep on a trailer tipped us off. We knew if we followed it, we would end up at Mudfest.

We had been dispatched to cover the 40-year-old annual event, sponsored by the Santiam Four Wheel Drive Association, that takes place in the backwoods Oregon.

Hundreds of specialty rigs converge here for a full day of complete controlled madness in a massive clearing along Highway 228, made entirely out of at least seven kinds of mud: Caked mud, mud mixed with grass, cement-like mud, liquid mud, slurry mud, airborne mud, and mud that appears solid but immediately turns to liquid on contact.

In every direction, jeepers with custom-built rigs roar, slide and bounce, with not defined trajectory or purpose other than to be out there. Some sit crippled, half submerged, tires spinning, like wounded animals on a mechanical savannah.  All the rigs are coated in at least three inches of light brown cake, so when we noticed a spotless and shiny new Pinzgauer, we became intrigued.

Mudfest, like all other such events, is like a working museum of unique and interesting rigs. The Pinzgauer is an iconic military vehicle, first introduced in Austria. It’s a tight rectangle of an army green truck with six wheels. So we had our angle: Find the Pinzgauer in this kinetic maze of gear crazy mud lunatics. That would at least give us a direction in the chaos.

Our intentions were sound, but as it turned out, our methods were not. Nonetheless, we managed to walk away, and in the end, we got the story.

The main arena sat some 50 yards away, and from our vantage point it looked relatively tame. A lifted Chevy rolled slowly past, and over the din of the engines, we flashed our press credentials and shouted for permission to hitch a ride onto the main mud field.

“Sure, hop in back,” shouted the driver. Myself and our video producer climbed into he bed of the 1975 Chevy, running a small block 350, owned and driven by Jack Lowenstein of Prineville. As he gunned the throttle, we grabbed what we could, which was essentially nothing. The rig didn’t have a tailgate, so we braced ourselves against the cab and the wheel wells and tensed up for the ride.

Almost immediately Jack ran the RPMs into the multi thousands, sending a curtain of mud over the truck. It rained down in thick clumps, like pancakes, coating our heads, notebooks and cameras. The truck rolled and bucked like a boat in a storm, and the rattling growl of a dozen high-octane engines made the air thick with sound.

Rigs moved in every direction, splashing into pits, throwing mud rooster tails, or just spinning in place. Most of the cabs were packed with passengers, each one laughing and waving, incredulous that two people actually elected to ride in the back of one of these rigs.

In the midst of the chaos, Jack leaned back and shouted through the split window, “I don’t think you’ll like this ride up here!”

Up ahead was the drag strip, where dueling rigs squared off for an all-out sprint on a slush filled straight track. As we sat waiting for the green light, an event official waved to us and shouted that we had to get out. He pointed to the ground behind the truck and looked us both in the eye. In such a random and reckless environment, if an official decided what we were about to do was unsafe, we had no argument at all.

We leapt from the back, landing in an ankle-deep soup. We had found ourselves right in the middle of the madness, with no rig. Loud and speeding trucks towered above us, bombing past, throwing mud and spitting black smoke. I took a quick scan across the field for the elusive Pinzgauer, but I saw only mud-caked rigs that had taken on the appearance of giant and violent insects, their exoskeletons made of steel, crawling across an alien landscape.

We made our way up the hill, and ran across a 1985 Chevy, running a 1992 6.5 liter turbo diesel. Chris Nelson was driving, and the passenger, Sam Stout, owns the rig. Both are from Alsea, near the coast. They offered us another ride, and we took it.

This time, the rig had a tailgate. The pair took us across the field in a slow, high-rev, leaning trajectory, which had me considering how we would escape should the truck roll over. I settled on a plan to leap to the high side and abandon truck if the worst happened, but it never did. I scanned the chaos again for the Pinzgauer, with no luck.

Once we made it to relatively stable ground, we met Jeremy Moore of Roseburg. He was up with a group of friends who brought 15 rigs to the event. Moore is typical among jeepers, in that nothing about his rig is standard. The sport attracts mechanical wizards who are equal parts curious and adventurous. In fact, Moore, who owns a Fabrication shop, built his entire rig around the shell of a 1983 Toyota. He runs a 1995 3RG engine.

Moore represents the main theme of the custom off-road world: people who are not satisfied with the typical, and have the skills to wrench their truck to performance levels that give them the confidence to spend their time blasting through terrain otherwise deemed unsafe.

And it’s not a cheap pursuit: Some jeepers will pay upwards of $50,000 just to build the basic rig. Many also compete, but as Mudfest is not a sanctioned event, all the craziness is just for the good time. But the event not only attracts visitors to the area, it donates all the proceeds, from admission cost to merchandise sales, to local causes. The off-roading community is a family of families, with a strong sense of community, and a solid affinity for mud, gear smashing, and excitement.

In the end, we never found the Pinzgauer, but we did manage to experience the loud, gritty, kinetically unsound reality that is Mudfest, right down at its core.

And we didn’t break anything either. 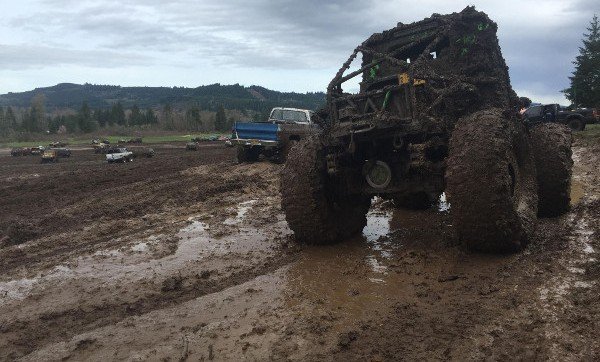