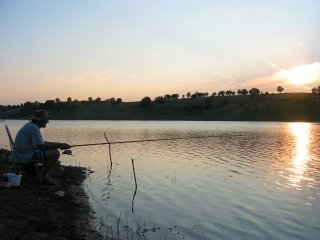 Curiosity is the mother of most of my back country hiking/fishing expeditions. Often times the rumor of a lake or stream or a blue dot on the map inspires a compelling urge to explore and fish. More than one of these expeditions has ended poorly, not in lives lost or any epic measurement but rather in scraped shins and a dejected, downcast hanging of the head. The causes of such dejection can be traced to iced-over lakes, fetid mosquito infested empty mud pits, inability to even find water or any one of a dozen other map reading or explorational deficiencies.

Sometimes though, everything works out as planned and the new water holds fish, maybe even a lot of hungry trout eager to snatch whatever fly or lure hits the water. These successes along with trips to known waters feed the lust for exploration. Back country fishing may be a day hike, but often overnight pack trips provide the most time to explore, fish, poke around and otherwise entertain myself.

One such trip into Oregon’s Sky Lakes Wilderness area allowed me, along with my friend Tom, to explore several lakes over three days of backpacking and camping. The first lake wasn’t much with a few small trout rising, the second lake where we ended up camping held a better promise, however the first night didn’t produce much for fish. The next morning we got an early start with fly rods and float tubes. Fishing started off slow with occasional rainbows taking the usual high lake flies. Around 10 am I noticed some surface activity and paddled over.

Size 8 mayflies were coming off the water with some regularity so I tied on a Parachute Adams and went to work. Three fish later, Tom’s curiosity got the best of him and he headed over as well. Tom hadn’t fly fished as much back then so it was a real treat to watch him work his first successful hatch. We caught 20 or so trout, and the numbers didn’t matter as much as the success. We kept a few for breakfast and headed in to camp. Later in the day we headed out to another lake but decided to hit our camp lake again for the evening hatch.

Another less fortunate trip found us hiking the Yellow Jacket Loop Trail. The trail started at a productive trout and kokanee lake and headed up the mountain to the dubious Dead Cow Lake. As it turns out, the Cow likely died of mosquito assault. The “lake” when we found it was more of a mountain sump pond, mucky and lifeless except for swarming and very successful mosquito larvae! Luckily the area had other lakes and we high tailed it away from the pesky bugs in time to make the sunset on the bigger lake.

The fun of new country and new waters never fades for me. Stored away in the back of my mind is a list of lakes or areas I want to explore when the time permits. One such blue speckled area on the map haunts me even today. I’ve heard there are some lakes with big fish up there, as well as summer mosquitoes.