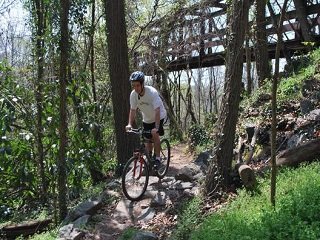 Today’s Trailhead finds us at a short, out and back, trail located in the heart of Richmond, Virginia. Featured in a recent issue of Outside magazine as one of the best towns to live in for outdoorsmen, Richmond’s North Bank Trail has become a popular retreat for runners and bikers alike. Keep reading to learn more about the history of this trail, as well as what to expect when you embark upon it.

Firstly, the North Bank Trail is not very long. At only two miles, out and back, the trail doesn’t offer much, in terms of heavy duty hiking. It does, however, offer a variety of steep climbs and sharp turns that provide bikers and hikers with a bit of a challenge on their outings.

You can access the trail at the James River Park lot and head out from there along the one-mile stretch. The trail also offers great views of the James River, where you’re likely to spot fishermen or kayakers. There are interesting rock formations, a cemetery, and artifacts to be found along the trail’s wooded sections, as well, including a rocky curved portion that peaks alongside a vertical rock face.

Years ago, Richmond’s James River, the river along which the North Bank runs, was one of the dirtiest rivers in the nation. These days, though, a rise in healthy mindsets has allowed the river to become exponentially cleaner, and once again inhabited by fish and crab. Furthermore, the trail itself used to be riddled with profane graffiti, but has since been significantly cleaned up due to proactive community members who saw the trail’s hidden beauty and true potential. The trail’s renewal has made it a haven for a variety of activities and has even enabled it to play host to official mountain bike events.

While it may not be one of those trails that require a tent and sleeping bag, let alone a daypack, Richmond’s North Bank Trail is a true testament to the collective outdoors mindset that has been steadily growing over the years. Once a polluted, vandalized section of woods, the trail is now a gem that offers great views of the city and the James River that visitors to Richmond will want to check out when they’re in town.