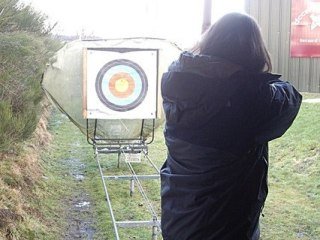 For most of us, the reality of being a hunter means that we spend way more time practice shooting than we do actually harvesting game.  No matter what you shoot, here are three tips to make you a better shooter behind a rifle.

In my experience as a guide and hunter, fear of recoil is the leading cause of poor shooting.  Flinching, or wincing, guarantees poor shooting results. It can happen for many reasons; such as, fear of loud noises, poor-fitting rifle, and a caliber that is too large. To combat noise, think redundancy. I wear double hearing protection in the form of foam ear plugs and ear muffs.

A poor-fitting rifle can alter the normal placement of your hands and cause bruising or other injuries.  If you feel awkward holding your rifle, go to a gunsmith and check on the fitting.  Most guns are made in general sizes and some of us don’t qualify as ‘normal’ when it comes to size.

Another way to combat fear of recoil is to make sure you are not shooting too heavy of a caliber.  I have hunted with a few guys who thought of their rifle caliber as an extension of their masculinity, which is ridiculous. I have seen a .243 kill a moose where it stood, so if your rifle rounds are making you hurt and jump, think about scaling down.

Every hunter is aware of the hype of shooting long distances, but a lot of hunters are not aware of where their bullets will hit at close ranges under 100 yards. This is a serious mistake when it comes to shooting and killing. One year when I was a young hunter out west, I sighted my rifle dead-on at 200 yards so I could easily shoot out to 350 yards. I never checked where my bullet would end up at 100 yards and learned a valuable lesson. I shot at a buck only 35 yards away and I only managed to take some hair off his back.

You owe it to yourself and your game to know where your rifle hits at extreme close distances. You never know when a close shot will happen, so be prepared.  I know for a fact that some guys laugh at me at the range when I shoot my .300 WSW at a 25 yard target after I am dialed in at 100 yards. I don’t care what they think and neither should you, so cover yourself and know exactly what will happen when you pull the trigger at close range.