Deer Calling During the Three Stages of the Rut 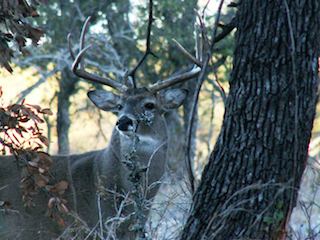 Here’s what you need to know to deer-talk your way through all three rut stages.

The pre-rut triggers mature bucks to become more mobile earlier in the evening and later in the morning.  They are slightly more vulnerable during this time of the season, but they are not love-dummies yet so aggressive calling and rattling will serve no purpose.  This is the best time for subtle and low-impact calling which gets the best results if you can find your way close to a common food source. If you are set up near a natural place where deer want to congregate, you can mimic familiar sounds to get a buck’s attention. Now is the time for slow rubbing of an antler on a tree, or the rustling of a ground litter as if a scrape is being made. Soft grunts and tickling antlers can bring in a big boy out of curiosity.

When the real rut kicks in, it’s time to step up the calling game by being more aggressive while leaving the scrapes alone to concentrate on the does. Bucks will abandon their scrapes as soon as the first doe comes into estrus, so find the does and bucks will show.  Depending on buck density in your local deer population, aggressive calling works well when competition is heavy but not as well when bucks have little competition.  This is the time for battle racks and loud, fast grunting. It is also a good time to try to change a buck’s direction with snort-wheezes and sexy doe talk.

Finally, the post-rut arrives and deer calling becomes more difficult and complex. Most bucks are just trying to survive after being depleted during the running of the rut.  They get a couple weeks rest before the unbred does create a second rut. The post-rut is a tricky time and you will actually have to take the deer’s temperature to determine what calling techniques might work. One day a soft grunt may do the job and some days it won’t, but one of the most important things to remember is that deer calls will not generally spook deer so there is usually no harm in using them at any time.

The three phases of the rut offer a great opportunity for hunters to make hunting dreams come true, so understand what your local deer want to hear and make them hear it.