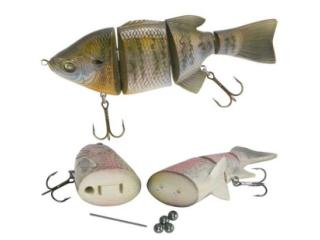 While out running errands the other day, I decided to stop by Bass Pro Shops to look around the fishing department and see what types of lures and tackle have been available since my last days working there. There were several new lures, rods, and reels that caught my eye, but what impressed me the most was how popular swimbaits have become. Several companies make swimbaits, with each offering its own characteristics and functions in the water. This can be overwhelming, as I noticed several customers holding one in each hand, comparing the two and trying to decide how one might be better than the other. I decided to highlight several companies' contributions to the swimbait market and provide you with a better understanding what hard plastic and soft plastic models are out there before making a trip to your local retailer.

I wish I could go into detail on each company's version of this great lure, but I'll focus mainly on the following: Strike King, Tru Tungsten, and Sebile. Of course, there are many others out there, whose swimbaits are effective, but I chose these four companies' swimbaits for their unique designs and popularity among fishermen.

Strike King offers several swimbaits, including the King Shad, Wake Shad, Baby King Shad, and Sexy Swimmer. The Baby, King, and Wake Shads are single-jointed baits and each works a little differently in the water. The Baby and King are essentially the same, though the Baby is one inch shorter than the King, which many anglers prefer. Both possess a small lip, very realistic wobbling action on the retrieve, and come in great patterns. The Wake Shad is a surface swimbait that, no matter how fast your reel it in, will remain at the surface and produce a noisy wake that fish can't resist. Finally, Strike King's Sexy Swimmer is a double-jointed member of the roster and has a longer, more streamlined body than the King and Wake Shads. The Sexy Swimmer sinks slowly, produces great action at any retrieval speed, and the extra joint adds a more erratic action to attract more aggressive strikes.

Tru Tungsten’s Tru Life swimbaits come in four, five, and large seven-inch models. Each has three joints, with four body segments, and provides great action in the water. The one trait that sets these baits apart from others is an internal chamber that houses tungsten ball weights. Not only do these weights provide weight and even noise under water, but they can also be removed entirely, which enables anglers to customize the sink rate. The lures come in a Wake/Slow sinking model, as well as a Slow/Fast sinking model, each designed to work at particular depths, depending upon where the fish are feeding.

Be sure to come back for part two of my review of hard swimbaits, where I’ll break down the characteristics of two more swimbait companies: Spro and Sebile. These companies make high quality, signature baits that anglers have fallen in love with, so you’ll want to be sure to keep an eye out for the second part of the Hard Swimbait Series soon.