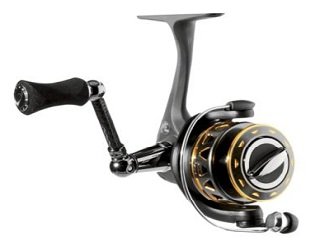 There are instances when a company releases a revolutionary product—let’s say, a baitcast reel—and the public’s reaction to it is so enthusiastic and positive that the company decides to incorporate the design into another product—let’s say, a spinning reel. If you haven’t guessed by now, I’m going somewhere with this. A few years ago, Bass Pro Shops released a revolutionary reel, known as the CarbonLite, that is comprised of a carbon fiber frame that enables the reel to be remarkably light, but incredibly strong. Well, following the success of the CarbonLite baitcast reel, the company has now come out with a spinning version of the CarbonLite, which is the subject of this month’s Tackle Review.

The CarbonLite spinning reel is made of molded carbon, which provides durability while remaining lightweight, which goes a long way towards maintaining comfort during a long day on the water. Furthermore, the handle is also comprised of carbon, as well as machined aluminum. The spool is designed to hold a variety of lines—from mono to thin braid—and is also machined, which reduces the reel’s weight significantly, without compromising performance or structural integrity.

Internally, the reel is as impressive as it is on the outside. For instance, it possesses six stainless steel bearings, as well as one roller bearing, which combine to create a smooth retrieve. Also, it has instant anti-reverse and gears constructed of hardened brass and zinc. Seven washers that alternate between carbon and stainless steel make up the CarbonLite’s drag system, which gives the reel’s drag longer life, and provides the reel itself with incredible stopping power that can stand up to big fish without breaking a sweat.

The real potential of the CarbonLite reel is reached when you pair it with a CarbonLite rod to create a very light, but super strong, combo built to handle nearly anything swimming beneath the surface. The reel is available in two sizes right now, each of which costs $79.99. However, when you purchase them as a combo with a CarbonLite rod, which retails for $99.99, you get the complete combo for only $149.98. If you’re on the market for a new setup this season, you could do a lot worse, and for $150, you’d be getting an amazing combo.

Looking at the CarbonLite spinning reel, it’s clear that much time and thought was put into creating this product. Its design exhibits attention to where strength is most needed, as well as a consideration for extending the life of the reel, which anglers will appreciate. Bass Pro Shops hit a home run with the CarbonLite rod and baitcast reel years ago, and it seems that they’ve got a Grand Slam on their hands with the addition of the CarbonLite spinning reel. Still skeptical? Don’t take my word for it; stop by your nearest Bass Pro Shops and feel the CarbonLite comno for yourself. I promise that, once you do, you’ll be hooked.