The Best Rifle Ever 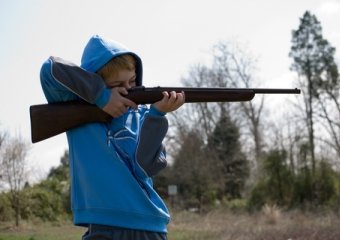 In a slot with no particular distinction in my gun cabinet sits the best rifle ever. This might be a rather bold claim except that the rifle isn’t even mine, although it used to be. It isn’t the highest power, latest cartridge, high capacity lead slinger. It’s just a modest Winchester 320 .22 LR. and the first gun I ever owned. After a year and a half of constant wishing, I was given the rifle on my tenth birthday. I actually owned the rifle for two years during which time I jumped quite a collection of soda bottles, empty shotgun shells and clipped fox gloves along with a few paper targets.

Once my younger brother turned ten, I moved on to a semi-auto and passed the rifle on to him. When my oldest son turned ten, my brother passed it on to him. Now it belongs to my second son Pierce and it’s likely to move a couple more times in this generation.

The current owner of the .22 sees fun as steelhead fishing, duck hunting and obtaining bullets for plinking with the rifle. This rifle in our family represents a first step into the world of plinking, hunting and the world of the outdoorsman. It’s a reliable plinker and training rifle for stepping up to a deer rifle.

Shooting .22 rifles is always a kick and accurate .22s are perhaps the best way for a new shooter to learn the ropes. Their kick is just big enough to get the idea of recoil without being frightening or intimidating. The same applies to the crack of the .22 rifle’s report. I favor the ruger10-22 auto for high capacity fun. Burning through .22 ammunition and bouncing cans up a hill is one of my all time favorite pastimes, especially if I’m racing someone else’s can.

The .22 is also a reliable tool for ranch work and small game hunting. I’ve even shot one fishing lure free from a snag in a clutch situation when I had one lure and large cutthroats were ignoring every other offering we had tried all day. (Note this was a small mountain lake with a safe backdrop.)

So there it is, my vote for the best rifle ever is the humble fun .22. To be exact, it’s the first rifle all of the boys in my family have owned. I’d venture to guess there’s one like it in your cabinet as well.