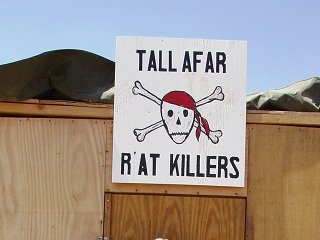 As written about in previous articles, a small group of civilian contractors served our troops overseas as Vector Control Specialists (VC). I was fortunate enough to be a part of this group and I was paid to hunt and trap several different pests that were possible disease carriers (vectors).  We hunted and trapped bugs, rodents, snakes, and animals both big and small. This is the third part in a series of articles documenting some of my adventures.

During the days leading up to Operation Iraqi Freedom, Saddam Hussein forced many Kurdish people in Northern Iraq to surrender their major farming implements to the southern Sunni’s and Shiites who were his allies. Hussein hated the Kurds as they were more independent and peaceful people. He thought of them as rednecks that needed to be cleansed from the country, so it was no surprise when he finally made them give up their tractors and trucks to his war effort.  However, the Kurds were also the major farmers of the region and when they had no machines to harvest their millions of acres of barley, it all went to seed.

When a major crop goes to seed and the fields are abandoned, it attracts rodents who feed on all that available food. Mice give way to rats, and when rats have an unlimited supply of food and water, they have a population explosion which they did in Northern Iraq. I was sent there in early 2005 to get a handle on the rat population. The rats were overrunning all of our American bases. Since snakes liked to eat mice and rats; the population explosion was also attracting deadly snakes as well.

The first night after my arrival, I had to enter the fields with a spotlight and take a survey of any rat activity. What I saw when I flipped on that light was a moving carpet made up of tens of thousands of rats. The numbers were biblical. It was clearly evident that before I could start an integrated pest management plan that I would have to eliminate thousands of rats to help obtain a manageable population. So, I assembled as many military personal as possible, and we armed ourselves with long-handled shovels and entered the first grid of my management area.

In tribute to the most basic and primal hunting techniques, we took to the fields and began clubbing running rats. I had had the area mowed earlier, so now the rats had only the cove of their millions of rat holes to them concealed during the day.  By night they had to eat, which meant they had to expose themselves. I wish I could say that we systematically methodically hunted rats that night, but I would be lying. It turned into a club fest and the only thing louder than the metal clangs of dozens of shovels crushing rat bodies, was the uncontrolled laughter of dozens of guys swinging shovels. I have to admit that it was a fun way to get paid.

The next day, I estimated that we had around 4000-5000 rat carcasses to deal with. The U.S. Army preventative medicine guys tested a percentage of those rats just to see what possible diseases were being carried by them. That was the beginning of the end of Saddam Hussein’s rat infestation.