Death Scares in the Field 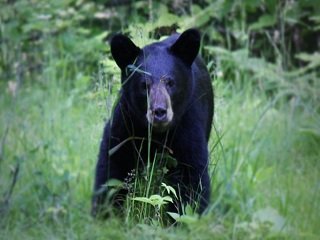 Danger comes with the territory when hunters travel the wilds of this world, but sometimes death reaches out and reminds us that nature does indeed have teeth. There is almost no way to be fully prepared for every knock on death’s door, but if you ever make it through a close call, you need to learn from it and hopefully pass on your knowledge to others.

My closest call happened on a late summer hike into a water hole in the Wasatch mountain range in Utah, but it was not that far from neighborhoods and humanity. I was carrying a portable tree stand along with my bow, and little did I know that my aluminum stand would be credited for saving my life that day against a top tier predator.

As I neared my stand location, I noticed the back of a small brown animal walk past a low spot in some brush up ahead. It resembled the color of a cougar, so I was not too worried since most Mountain Lions run at the hint of humans. I continued to walk towards the spot, hoping to get a peek at one of these secretive cats, and out of nowhere a small Black Bear cub walked right by my legs, totally unaware of my presence.

I instantly froze and began to consider my options.  It was too late though, because the mother bear ran up to me popping her jaws. In a giant blur, she had retreated back into the brush, but she continued to pop her teeth and growl. I knew that I had not seen the last of her and I braced myself for an attack. I dropped by bow, which was dead weight at this point, and positions my tree stand as s shield all while slowly backing out of the area. I made it 20 feet when here she came again.

My adrenalin pump was maxed out as she ran up to me snapping her jaws. She arrived so fast, there was no possible way I could ever even have time to flinch so I knew I my life was at her mercy. She left again and sounded even madder. I quickly pulled out my video camera and recorded my last testament for my wife, put the camera in my pocket, and here she came again. This time was different though. She silently ran straight at me and something told me that this was the money charge.

I held up my stand and braced myself. I remember sweat pouring down my face and eyes. I had the metal taste of fear in my mouth and my body was slightly quivering from the overload of adrenaline. She ran full speed and as she veered to run by me, she thrust her head at me and tried to take a giant bite out of me and got a mouth full of metal instead.  The miss seemed to make her even angrier as she ran out of sight and started circling downwind of me. I had a small window of opportunity to run out of that area and took it. I ran like crazy and I made it far enough away that leaving her cubs behind wasn’t an option. I had survived.

The lessons were obvious, but the reality did not hit me until the following spring when I learned that several Black Bears were overly aggressive in this area due to no hunting pressure and poor food availability. And, a young boy was killed in his tent while camping with his family in this area. It was a rare occurrence that usually doesn’t happen in Black Bear country, but it can and does happen.