Our Nation’s Waterfowl Hotspots: The East 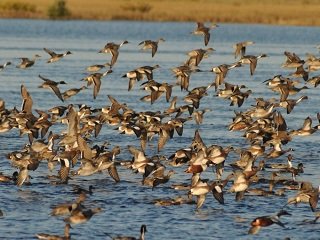 Most hunters will probably agree that sometimes the best hunting occurs where there is the most game. Whether you are hunting moose or woodcock, you are more likely to find success if there adequate numbers in the area you are hunting.  With this basic theory in mind, the best places to waterfowl hunt are the areas that hold the greatest number of birds.  This first in a series article lists waterfowl hotspots in the eastern half of the United States.

New England has Chesapeake Bay to look too for fantastic opportunities.  Abundant waterfowl species are: Mallards, Black ducks, Green-winged Teal, Canvasbacks, Canada geese, and Greater Snow geese.  The best time for hunting this region is from December to January.  Chesapeake Bay has the largest Estuary in the United States and since it sits in the middle of the Atlantic Flyway it’s a fantastic area to spot migrating birds. There are also many public waterfowl hunting areas to choose from.

The South has a hotspot in Southern Louisiana within the Mississippi Flyway.  Look for Gadwalls, Green-winged Teal, Blue-winged Teal, Pintails, Mottled ducks, White-fronted geese, Lesser Snow geese in this area. The best time to hunt is from late November to January as this is the wintering location for many migrating birds.  Since the best hunting is within the coastal marshes, the most successful hunters will employ shallow-running, duck boats through the acres of public land.

The Midwest is vast and pinpointing where the birds are concentrating can be a task, but it is made easier with several online flyway reports. The Midwest is famous for holding tons of Mallards, Pintails, Gadwalls, and Green-winged Teal, Lesser Scaup, Canada geese, and Lesser Snow geese in the eastern area of the Central Flyway. Eastern North Dakota sports lots of open public land for hunting, millions of breeding ducks, and large numbers of staging waterfowl during early season.  The best time to look for waterfowl in North Dakota is during October and early November. Not surprisingly, these wetlands attract droves of staging waterfowl during migration.

The Mississippi River marshlands along the borders of Minnesota, Iowa, and Wisconsin are also great areas to hunt in this Flyway especially for Canvasbacks. These states don’t have the most generous bag limits, but 50% of the nation’s canvasbacks can be found migrating through this area.

These are general ideas and times, for more specific detail on the best time to hunt these areas, Ducks Unlimited has a great flyway reporting page and you can view it here: www.ducks.org