Our Nation’s Waterfowl Hotspots: The West 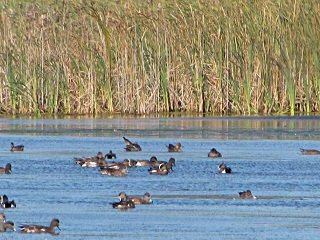 In the first article of this series, “Our Nation’s Waterfowl Hotspots: The East,” we laid out the best spots to hunt in the different regional areas of the United States from the Mississippi river to the Atlantic.  In this article we will explore this nation’s waterfowl hunting regions from the Mississippi to the Pacific.

Starting in the middle of the West, one often overlooked area is the Great Salt Lake marshes of Utah. Falling within the Great Basin hub of the Pacific Flyway, the Great Salt Lake boasts miles of salt marshes.  Public hunting can be found on the lake itself, and along state management hunting areas in the marshes.  There are several private hunting clubs so it may be slightly difficult to find the small spots of public ground.  Look for Pintails, Mallards, Widgeon, Gadwalls, Shovelers, Green-winged and Cinnamon Teal during early October through November for the best chance to score.

In the Southwest, southeast coastal Texas is the place to be.  Solidly in the Central Flyway, southeast coastal Texas is the place to hunt for  Pintails, Widgeon, Teal, Gadwall, Redheads, Mourning Dove,  Snow Geese, Blue Geese, Ross’ Geese, Whitefront Geese and Sandhill Cranes. The best time to hunt this region is late November through December for wintering birds.  This area has bountiful public hunting areas, but it is also a great place if you want to go on a guided hunt.

In the West, the Central Valley of California is a hotspot for Pintails, Mallards, Widgeon, Green-winged Teal, White-fronted Geese, and Light Geese. Go to California from late November to January to put the smack down on the wintering birds of the Pacific Flyway. Public hunting land is available on both state and national wildlife areas and there are several guides and private hunting clubs as well.

In the Northwest, look to northwest Washington in the Pacific Flyway for great hunting. Mallards, Pintails, Widgeon, Green-winged Teal, Long-tailed ducks, and Scoters winter in the Puget Sound area from November to January. There are several state wildlife areas for good public access so it isn’t necessary to spend a lot of money to get that great shot at your perfect bird.

Again, these are general times for seeing the best numbers.  Ducks Unlimited has an effective tool to show migration paths and times to pinpoint more specifically when the birds are in your area.  You can find this website at: http://www.ducks.org/migrationmap/?poe=migrationHQ.