How to Waterproof Your Map 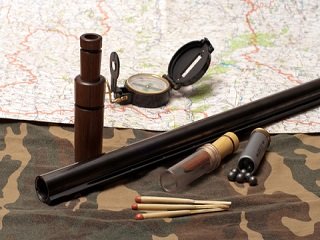 Waterproofing a map seems like such a simple, benign act of hunting preparation, but I recently found out that it’s not as easy as it sounds to waterproof a paper map and get good results. Here are some lessons I learned.

I am in my last week of preparation for an Alaskan Dall sheep hunt. I bought a couple of topographic maps of my intended hunting area. I thought I had better be totally prepared and get them waterproofed. So, I bought a product made by Aquaseal called ‘Map Seal,’ sounded easy.  After finding a nice flat spot to lay my map out on, I read the instructions and went to work. The instructions called for shaking the bottle mildly and then painting the map with a paint brush which was included with the Map Seal. I was to let it soak in for five minutes and lay on another coat. I did, and my map turned into what looked like a giant piece of bacon.

The map did not dry flat as it was supposed to even after hanging it up to dry like the instructions stated. I tried to flatten the map with heavy objects but the damage was done. No more Map Seal for me.

My next try was to use Google and see what other waterproofing methods were out there. I tried a simple process of rubbing a piece of paraffin wax on paper and that took forever and left me with a piece of paper that was permanently tacky. No thanks.

Then I got the idea to use a product that my wife had bought me for my boots called Camp Dry made by Kiwi. Kiwi is famous to all military members, both past and present, as they are the longtime makers of boot and shoe polish.

I purchased a new map, laid it out flat and covered it with Camp Dry. The one thing I really liked about the Camp Dry was that it came in an aerosol can. This meant the spray was a fine mist that distributed the product evenly over my entire map. It dried quickly (in about 20 minutes) and it did not wrinkle my map at all. It did put off a hefty vapor but an open window took care of that.

After a few applications, I had a perfectly waterproof map. I will never use anything else besides Camp Dry for waterproofing any paper items. I do know where you can get a cheap bottle of Map Seal, but it is partially used.