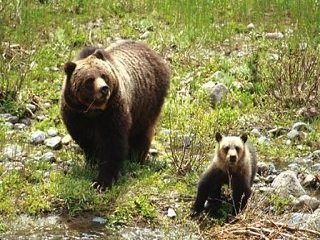 I have been hunting for almost 40 years and I am not ashamed to admit it or share about the times I was frightened in the outdoors. I recently had a night to remember, although it is one that I wish I could forget, and it was really all my fault.

As I sloshed the three miles it takes to get to my bear stand through miles of swampy ground, it felt like a good night for hunting. There was barely a breeze and it was overcast. It seemed like the kind of night that bears would be quietly sneaking in to eat my bait and hopefully get shot by me. Since it doesn’t get dark until around midnight, getting into my stand at 6:00 pm meant for a long night.

To my disappointment, nothing showed up all evening. I decided to give it until midnight and then call it a night. I knew I would have to tromp through the dark with only my headlamp, but that is the price people pay to hunt sometimes. So, at ten minutes until midnight, I began gathering up the various items I had hanging in the tree with me. As I put my camera into my backpack, I heard a stick break and knew that meant a bear was coming in. It was too dark to shoot, so I knew I would have to sit there until the bear ate and left.

Out of the thick undergrowth a sow grizzly bear and her cub appeared at the bait barrel. I was hunting black bears, and it is illegal to shoot grizzly bears off a bait in this particular unit, so a grizzly is the last thing I wanted to see…..at dark……all alone.

If having to wait until they left before I could get down wasn’t torture enough, the breeze switched and blew right to them. Instead of running off, she looked at me out of the side of her eyes and started popping her teeth. This meant that she knew exactly where I was and she was upset and considered me a potential threat. Great, now what?

I think I heard her emitting a low growl most of the time while the cub ate my dog food without a care in the world. After about an hour, I could only make out their shapes as they circled my tree and left, or at least I had hoped they left. I still couldn’t make myself get out of the tree.  Even with a high-powered rifle, one never feels safe around a mad grizzly bear. They can be on you in a second from any direction and no quick draw could ever be fast enough.

Eventually, I climbed out of my stand and began to speedwalk the three miles back to my truck. Every single step I thought I heard a grizzly bear running at me. Every single rustling of the wind sounded like instant death bearing down on me. As I reached my truck and practically jumped inside of it for safety, I was soaking wet from all the overexertion and stress.

The stats show that a person has a better chance of being struck by lightning than to be attacked by a grizzly bear, but tell that to yourself when you are alone in the dark miles away from your truck and knowing there is a mad grizzly bear with a cub out there somewhere. No thanks. I’d rather be stalked by Bigfoot in a lightning storm.