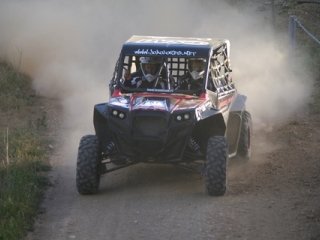 Indianapolis. Bristol. Talladega. When it comes to asphalt track racing, most people can name a few of the most popular races whether they’re fans of going fast or not. However, when it comes to racing on dirt, and manning the wheel of a 4×4, ATV or dirt bike, the legendary races and most talented drivers aren’t quite as well-known.

Although the perhaps most famed North American off-road race is one that motorsports enthusiasts are mesmerized by. Or at least I am.

Since I was 10 years old, I’ve wanted to personally witness the Baja 1000. This famed trek stretches between 650 to 1,100 miles, depending on the course for the year, and allows everything from trophy trucks and buggies to dirt bikes and stock VW bugs to take on the course along the Baja California Peninsula of Mexico. First ran in 1962, the race has a storied history of victors including racing legends Ivan Stewart and Andy McMillin, racing alongside guys and gals completely unknown to anyone but their grandma as an off-road racer.

Documented in the 2005 Dana Brown film, Dust to Glory, the Baja 1000 is a race full of mechanical, mental , physical and emotional challenges. While drivers depend on their rig to sustain the miles, they must also endure staying awake for the 14 to 30 hours required to finish the race, and endure the battering of rough, rocky, desert terrain. However, there’s one thing about the Baja 1000 that has always baffled me.

My obsession with the race stemmed from a Super Nintendo game that put me behind the wheel of an Ivan Stewart trophy truck. While I loved the yells of “Arriba!” from the game as I jumped off of dirt lips, I inevitably would end up hitting a spectator on the side of the road. Turns out, the reality of the race isn’t much different. As it winds through Mexican towns and various checkpoints, the race finds locals and spectators from afar lining the course in close proximity; which is something you just don’t find in the States. Something about safety and government regulations…

While the loose spectator rules and mesmerizing desert scenery are cool, the coolest part is who can enter. You can. That’s right. You can. I can. Your mom can. The range of vehicles allowed to enter and participate in the Baja 1000 runs the gamut. For an entry fee that runs in the $1500-$2500 range, and a budget to build something suitable to run the course, SCORE Off-road racing, who officiates the event, will let you in.

And I like that. So, I’ll be saving up my entry fee and trying to track down a late 60’s V-dub bug. Then I’ll convince my other half that he’s always wanted to be a pit crew. And I’ll need to teach my son to co-pilot.