A Florida teenager didn’t even want to go fishing with his mother and stepfather earlier this month, and now he’s in the record books for catching a whopping 64 pound flathead catfish.

Charles Patchen, age 13, was bream fishing on May 15 on the Chattahoochee River in Jackson County, Florida when the fish suddenly stopped biting.

His stepfather suggested maybe there was a larger predator in the water scaring the bream away. So instead of minnows, they baited a bluegill they had caught earlier. And sure enough they got a bite.

When the flathead first took the bait, the kid assumed it was hung up on something. Then suddenly it took off. Patchen reportedly fought the fish for two hours on 14-pound test while his stepfather guided the boat with a trolling motor.

“I was so tired after reeling it in that I fell back into the boat to rest,” Patchen said, according to a Florida Fish and Wildlife Conservation Commission press release. “But I’m glad my mom made me go fishing that day because now I am the catfish master!”

After making the catch, the family had the catfish certified by state officials as in fact the new state record. It beat the previous flathead catfish record by eight pounds.

“Charles’ flathead catfish is a great catch to add to our state records — and caught on a 14-pound test line, by a 13-year-old at that! Just one more reason why Florida is the ‘Fishing Capital of the World,’” said Tom Champeau, director of the Division of Freshwater Fisheries Management. 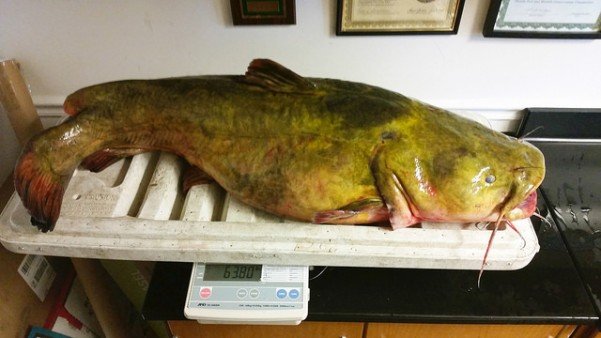