Girl Reels in Record Cobia Bigger Than She Is

Whenever a child sets a fishing record there emerges a fair number of skeptics. So you can only imagine how many people might doubt the story that a 9-year-old girl has set a new Maryland state record for a cobia fish that weighed almost 35 pounds more than she does.

But that’s the story her father told the Maryland Department of Natural Resources and he’s sticking to it. Ed Zajdel told how he was fishing with a friend Robert, his daughter Emma and her friend Ashton hoping to catch some bluefish.

While trolling, they suddenly hooked up and young Emma set the took control of the fight, belting herself in and battling the fish for about 20 minutes.

“At first, we thought it was a shark, and the line was going out.” Emma said. “I could hear the reel and the drag and I thought I could go over the side.”

Ed said he kept the boat in gear, following the fish at a 45 degree angle to keep the line tight. Then once they got the fish to the boat he said it went ballistic.

“Emma and Ashton scurried to the front of the boat while Robert and I wrestled the fish into the fish box and iced it down,” Ed told state officials.

The fish turned out to be a giant cobia the size of which nobody on board had ever witnessed. It measured 66.5 inches long and 94.6 pounds setting a state record. Emma, meanwhile, measured 52 inches tall and 65 pounds. The previous state record cobia weighed 79 pounds.

Emma’s catch might also qualify for an International Game Fish Associatoin Small Fry World Record for a fish caught by an angler under 10.

Until then, initial reports are that the cobia “tasted good.” 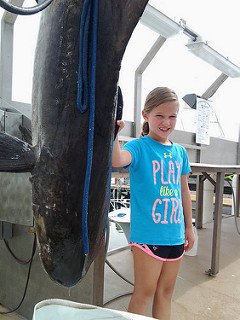