Both of the Boone and Crockett and the Pope and Young clubs have confirmed the existence of an American bull elk in Montana that could break the all-time record.

The bull elk was landed during the start of archery season so it still has to complete the required 60-day drying period of the rack and skull before an official measurement can be taken, but all signs point to a record breaker.

The Pope and Young Club records the records of big game that’s hunted with bow and arrow, while the Boone and Crockett Club handles those taken by firearm. This elk is a record breaker in both clubs.

RELATED: How the Boone and Crockett Club Led the Conservation Movement

Scoring is determined based on the length of the animal’s antlers and the size of its skull. The green score, a measurement of the antlers before drying, was a whopping 429-6/8 net and 448-4/8 gross. The current record holder for typical American elk measured 412-1/8 points and was taken in Arizona in 2005.

Along with heralding the hunting achievement in this massive bull elk, Pope and Young’s executive director Joe Bell, said it symbolized a greater success.

“Any game animal taken in an ethical, sportsmanship-like manner is a trophy worth honoring,” Bell said in a press release. “However, some specimens are remarkable, not only for their size, but how they symbolize successful conservation efforts.” 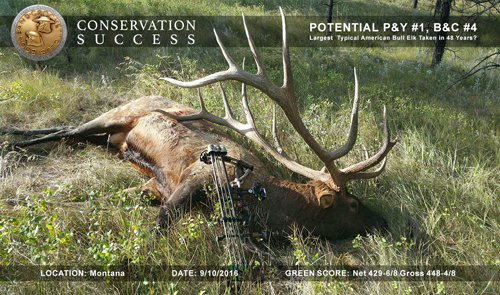