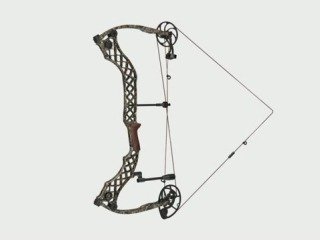 Over the last 25 years, I have been a hunting guide in three states and I have hunted in 16 different states with every brand of bow. Until recently, I have had no brand loyalty but that all changed after testing out and reviewing the new Mathews Heliᴹ compound bow. It is the latest offering of solocam bows from Mathews and here are my thoughts on what I think is a superior product.

Upon receiving the bow from Mathews, I was blown away by how light it was when I pulled it out of the box.  According to the manufacturer, it weighs 3.5 pounds.  I have held dozens of bows in my lifetime and this is the lightest of them all. It is obvious to see how Mathews accomplished some of the Heliᴹ weight loss as the profile of the complete riser is machined out in square-shaped spaces. It sort of resembles a waffle iron, but way more deadly.

The next feature worth noticing is the length from axel to axel. It is a short 30”. Not too long ago, short bows had the reputation of being less accurate than their longer counterparts, but that myth has long been dispelled because any bow’s accuracy is directly related to its brace height, and the Heliᴹ has a 7” brace.

Another feature I noticed was the hickory hand grip that Mathews is famous for, except this grip is a departure from the past as it is thinner than the standard grip that Mathews has offered for over two decades. It seems to fit in my hand a little better.  Another plus, this bow is balanced. You can hold it at the grip with two fingers and feel the balance which makes it seem like a very well-engineered weapon.

After getting the bow set up, it was time to shoot it. I don’t get too scientific when it comes to shooting, but I do require a bow to shoot decent groups at 30 yards.  I easily shot 3 inch groups and was shocked to find out how quiet the bow was. The only negative I took away from shooting the bow is that it did not seem to be as vibration-free as other Mathews’ models. It may be its lightweight design. Regardless, it is not enough of an issue to discourage its use. The Heliᴹ is a sweet shooting bow and I recommend it to any bow hunter.