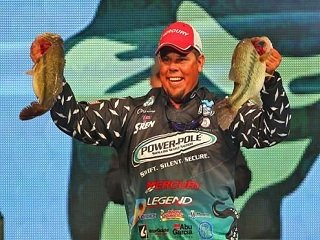 2012 is well on its way to becoming a year of surprise victories. It can be argued that the New York Giants’ Superbowl victory over the New England Patriots was a big upset in football. Likewise, there are many that were caught off guard this year in the fishing community. The single biggest event in fishing, the Bassmaster Classic, has once again come and gone. Many anglers would have bet big money (and some probably did) on legendary angler, Kevin Van Dam, to win a third consecutive Classic, which would have been his fourth Classic win overall. However, Van Dam and a field of impressive anglers were beaten out this year by Chris Lane. Keep reading for more coverage of the 2012 Bassmaster Classic.

Held on the Red River, in Shreveport/Bossier City, Louisiana, this year’s Classic saw 50 of the sport’s top competitors vie for the best weigh-ins, a $500,000 prize, and the title of Bassmaster Champion. After Day One, Lane placed sixth with a weigh-in of 16-4, tying his brother Bobby Lane. He pulled ahead the second day, however, and claimed the top spot with a one-pound lead over the former first place holder, Greg Vinson. Vinson would chase after Lane’s first place spot for the rest of the Classic. However, Lane would remain on top on the final day with a weigh-in of 15-pounds, 14-ounces, bringing his Classic total weight to 51-pounds, 6-ounces and granting him his first Bassmaster Classic win.

The spawn set in right in the middle of this year’s Classic, which forced many anglers to adjust their strategies on the water. During Day One, the bass were still situating under vegetation, displaying typical winter behavior. However, the next day they moved to stumps and shallow areas to spawn. This meant that fish were starting to become more aggressive with strikes, but it also meant that anglers needed to fish shallow to capitalize on this behavior.

Chris Lane attributes his victory to two lures: a Luck “E” Strike G4 tube and a Gambler Ugly Otter. He fished the G4, which is a tube outfitted with an interior layer of chartreuse laminate and a skirt that flashes during the dive, in shallow, stained water. The Otter he worked in clearer water. Other anglers in the Classic had good luck with dark-colored Paca Craws, chartreuse and white spinnerbaits, or the square-billed Bandit 100 crankbait in chartreuse/black.

After three days on Louisiana’s Red River, the Bassmaster Classic ended in what some might call an upset, but what can ultimately be called a great effort by an impressive angler. The change in fish behavior mid-tournament hindered the efforts of several anglers, including KVD, but by trusting his instincts, Chris Lane grabbed ahold of the number-one spot and never looked back once he had it.